On Saturday, Sept. 10, a special ribbon-cutting ceremony and dinner took place following a concert with 70 current and former members of VOL to celebrate the dedication of the Danny Murray Recording Studio.

“It was a thrill to have so many Voices of Lee alumni back on the risers Saturday evening,” said Murray, a 1975 Lee graduate. “My heart was full when they sang! Then to top that off with the recording studio bearing my name is the honor of a lifetime. I am so grateful!”

The evening performance was part of a weekend-long celebration, honoring Murray and his wife Debbie for their four decades of dedication to the musical program and the institutional advancement of the university.

During the show, the Murrays were honored at both the state and local level. Tennessee Representative Dan Howell commended Danny for his work and presented an official proclamation by the state government to that effect. Cleveland and Bradley County mayors Kevin Brooks and D. Gary Davis also proclaimed Sept. 10 as “Debbie and Danny Murray Day,” wishing them “much success in the new recording studio.”

After the concert, Church Street and Central Avenue were closed so all guests could enjoy a gourmet buffet and reception, view the ribbon-cutting, and take tours of the new studio. 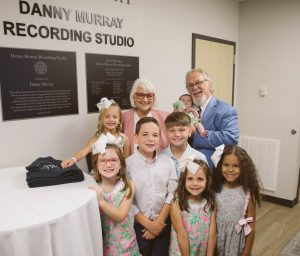 In 1994, Dr. Paul Conn, then president of the university, asked Murray for help forming a new musical group. Having experience organizing small ensembles, he agreed and went on to create a unique ensemble that would “produce such a finely-polished sound and versatility that could represent Lee in any venue, for any audience, with excitement and excellence,” said Conn. “For the last 28 years, both Danny Murray and the Voices of Lee have been the face of Lee to millions of people around the world.”

Danny’s passion for student recruitment and the addition of VOL played a key role in increasing enrollment numbers from 1,200 to 5,000 students over the span of 30 years. “Danny has brought something rare and distinctive to his alma mater, and the university will always be grateful,” said Conn.

To commemorate his achievements, there is a plaque inside the studio that reads:

“This studio is named in honor of Danny Murray, musician, visionary, leader. Who by his enormous talent, energy, and dedication, has shaped the lives of hundreds of student musicians. He has been a master teacher, a gifted musical communicator, and an indispensable force in the growth and development of Lee University. Generations of Lee students have come to this campus as a result of his tireless efforts over four decades, and have left as better women and men, to serve the Kingdom of God.”

The Danny Murray Recording Studio, managed by Britt Murray, is a two-story building equipped with a main studio for ensemble recording, offices, a lounge, and labs for students to work both individually and in a classroom setting.