On Saturday, September 10, 2022, an inauguration ceremony was held for the new Mid-Atlantic Hispanic Region of the Church of God, comprised of the Spanish speaking congregations in Delaware, Maryland, Virginia, and, in the future, West Virginia.

“This new region, birthed by the Northeast Hispanic Region, is energized and ready to reach the harvest that God has prepared for them,” stated Dr. David Ramírez, third assistant general overseer. “With a sense of urgency, clarity of vision, and strong dependence on the Holy Spirit, it is poised to diligently march toward the ripe Latino/Hispanic harvest.”

Hundreds of members, ministers and pastors gathered at the Iglesia de Dios in Owings Mills, Maryland (Hispanic Church of God) on September 10 to formally inaugurate the Mid-Atlantic Hispanic Region and install its regional overseers, Dr. Rigoberto and Sara Ramos. A reception for ministers and their spouses took place at the conclusion of the event.

Ramírez presented a message prior to formally declaring the official opening of the new region. In his sermon Ramírez encouraged the congregation to, “be strong and courageous, to never be afraid or be hopeless because the Lord of the harvest, will remain with us wherever we may go. Let us go forward and share the good news of salvation in the power of the Holy Spirit.” Ramírez was accompanied by his wife, Fernanda. 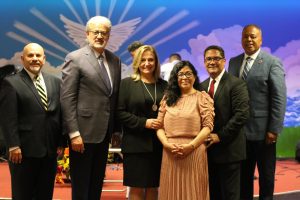 This day was particularly special for the Church of God Office of Hispanic Ministries, led by director Dr. Carlos S. Morán, and overseers, Dr. Juan A. and Rev. Jennie García of the Northeast Hispanic Region. Leadership within that region and the Hispanic Ministries Advisory Council had been analyzing and envisioning the strategic formation of a new Spanish-speaking region in the USA for more than six years. Dr. García asserted that to be a first-hand witness and partner in the birthing of the Mid-Atlantic Hispanic Region, “is a dream come true for the pastors and churches of the Northeast and the Mid-Atlantic regions.” Furthermore, the Northeast Hispanic Region has expanded to multiple Spanish-speaking regions east of the Mississippi River and it will continue to explore other possibilities to, “intentionally go, baptize and disciple Christ’s harvest,” García added.

The International Executive Committee sent special greetings and commendations to the respective leadership of the Northeast Hispanic and the Mid-Atlantic Regions. The International Executive committee affirmed that, “there is great enthusiasm, realistic expectations, and keen eagerness to continue to see the steady, consistent growth and development of the Church of God Spanish-speaking ministries in the USA.”

At the end of his message, Dr. David Ramirez asked the congregation to verbally express their commitment and affirmation, “to advance God’s kingdom, to support the Mid-Atlantic Hispanic regional office in the development and implementation of its vision and mission and to persevere in honoring God by being His Church in mission.” He later reiterated these same words to the district overseers and their spouses surrounded Dr. Rigoberto and Sara Ramos and prayed for them.

Morán summed up the event stating, “The historic, powerful, festive inauguration ceremony of the Mid-Atlantic Hispanic Region honored God and the fruitful labors of His servants and faithful members of the Spanish-speaking Church of God in Delaware, Maryland, Virginia and very soon in West Virginia.”