Cleveland, TN–Dr. Dennis Page, most recently the administrative bishop for Eastern North Carolina, has accepted a post at the International Offices with Ministerial Development and the Division of Education. Page officially joined the staff earlier this week on Monday, August 15, 2022.

Page will serve as USA Coordinator of several Church of God educational ministry programs, including the School of Ministry (SOM), Calling and Ministry Studies (CAMS) and the iconic Ministerial Internship Program (MIP).

“Dr. Page assumes the responsibilities for overseeing the programs of which Dr. Don Bennett was previously responsible until his retirement earlier this year,” stated Dr. Michael Reynolds, Director of Ministerial Development. “We look forward to Dr. Page being part of the team here at the Division of Education.” 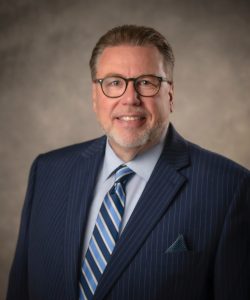 Page’s background is in Christian education where he holds degrees from East Coast Bible College (A.A.) and three degrees from Carolina University of Theology (B.A., M.A., D. C.E.). “This educational background will serve him well as he oversees these key ministry education components for the division,” Reynolds stated.

Page began his ministry as an evangelist before assuming the pastoral role at five different congregations in North Carolina between 1981 and 1996. He has served the Church of God in several administrative roles at the state and regional level, including youth and Christian education director at Western North Carolina (1996-200), Alabama (2000-2004), and Florida (2004-2010). In 2010 he was appointed regional overseer for Northern New England before eventually assuming the same role in Eastern North Carolina.

Dr. Page is married to Judy and they have two married daughters and seven grandchildren.