Three members of the Executive Committee – Tim Hill, Raymond Culpepper, and David Ramirez – were first elected in 2016. The three were reelected at the Assembly to the offices of General Overseer, First Assistant General Overseer, and Third Assistant respectively. They will complete their terms in 2024. 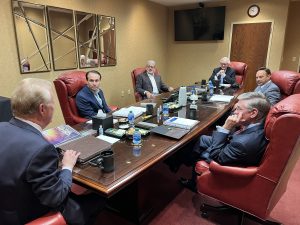 Elected to fulfill the role of Second Assistant General Overseer was Rev. Tony Stewart. He, and his wife, Kaci, and their two daughters, come from Tampa, Florida, where Tony Stewart is the senior pastor of citylife church, a 4,000-member, multi-campus, multi-racial, multi-generational church in the Tampa Bay area. The citylife church has been named by Outreach magazine and Lifeway Research as one of the fastest-growing churches in America, receiving this recognition four out of the last five years.

Along with his pastoral responsibilities, Stewart travels nationally and internationally speaking in conferences and camp meetings. He has hosted a weekly broadcast of citylife TV reaching into over 10 million homes. He was recognized in 2018 as one of the Top 40 “Young Kingdom Voices” in the United States. He is also a former chairman of the Church of God International Executive Council, serving on the Council between 2014-2018.

Rev. Gary Lewis was elected to the office of Secretary General. He completed a term on the International Executive Council, serving the last six years from 2016-2022. He met his wife, Lori, while attending the former East Coast Bible College in Charlotte, N.C. They have three children and two grandchildren. For the last six years, Gary Lewis served as state overseer for the South Georgia region of the Church of God.

The new secretary general has a rich background in youth work at the state and international level. For a total of 14 years, the Lewis’s served as director of Youth and Discipleship in the following regions: Midlands, Pacific Northwest, Eastern North Carolina, South Georgia, and South Carolina. He was elected assistant director of Youth and Discipleship in 2008, serving the Church of God until 2012 when he was elevated to the international director. In their early ministry the Lewis’s served as student pastors and senior pastors.