San Antonio, TX—Church of God World Missions held a pre-Assembly banquet on Monday, July 25, 2022, at the Grand Hyatt Lone Star Ballroom. Winners of church and state awards were announced at the event.

Historically one of the highlights of General Assembly week, the banquet attendees enjoyed Geron and Becky Davis and Voices of Lee from Lee University. The featured speaker for the evening was Dr. Mark Rutland, founder and director of the National Institute of Leadership and Global Servants, a missions organization with focused efforts in Ghana and Thailand.

One of the many highlights of the evening was the time set aside to honor the General Director of World Missions, David M. Griffis, and Assistant Director, M. Thomas Propes, for their six years of service to Church of God World Missions. Their charge to “Send the Light to the Cities” was touted as making “a lasting impact on the dissemination of the gospel around the globe.”

As part of the honor for Griffis he was presented a beautiful painting which captured his leadership of World Missions. In his remarks, Griffis thanked supporters from around the globe. He also made a surprise announcement that Sudan became the 186th country where the Church of God has a presence. 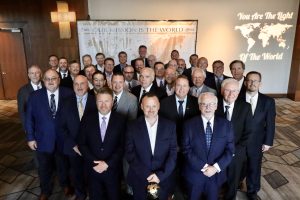 State and Church winners pose for a group photo following the banquet on Monday, July 25, 2022 in San Antonio (click image to enlarge)

Church of God World Missions Partnership Award Winners for 2020 – 2022 include then following, listed by categories, church, and/or state/region: