San Antonio, Texas–During a special time of pre-Assembly prayer on Sunday, July 24, a traditional servant award, The Order of the Towel, was presented to Bishop Alexie Demodovach, Church of God overseer in war-torn Ukraine.

Doug Small, coordinator of Church of God Prayer Ministries who helped present the award says, “The Order of the Towel reminds us that if we accomplish our mission, but do so in a manner that violates the spirit of the mission, we have failed. Deep dependence on God and simplicity marked early Pentecostals.” 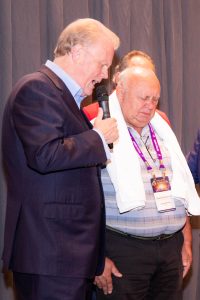 “Bishop Demodovach has served the flock there, literally under fire, without a certain and sure outcome,” stated Small. “His life has been at-risk, as well as the pastors who might have fled, but have followed his steady example of calm under fire.”

General Overseer Tim Hill recently made a surreptitious visit to the European nation to be with the Bishop and other leaders and assure them of international prayer support and concern. Hill was also on hand to present the award to Demodovach, along with Dr. Steve Darnell, Field Director for Europe, and Dr. Tom Rosson, Educational Director.

“It is fitting,” Hill noted, “to call attention, with this award, to those who are in harm’s way.”

Small noted that 52 nations have some ban on the Bible or religious literature. Forced church closures are up in China and detentions of Christians in India. Fifty-five nations are on the critical watch list due to the growing danger of being a follower of Jesus Christ.