There are times when one finds it hard to describe the importance of the moment. So was the following divine encounters, which were later defined by one Ukrainian government employee as “historical,” took place on July 4 – 5, 2022.

The journey began with God’s favor. Mayor Ivan Pavel, Mayor of Dumbraveni, Romania drove our vehicle. The staff of the Governor of Chernivtsy, Ukraine issued diplomatic passage into the Ukraine and was waiting for us at the Romanian/Ukrainian border. Once inside the Ukraine we were provide police escort to the government building in Chernivtsy. 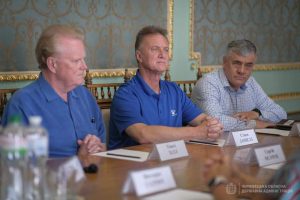 The Governor and the Vice Governor both met us dressed in army fatigues, indicating their readiness to personally go to battle if necessary. While much of the conversation centered around the war itself, Governor Osachuk stated; “We realize we are outnumbered and that Russia has many times the weapons and battle artillery that we possess. However, if we Ukrainians can obtain from other nations assistance in weaponry, we will win this war. Our spirit is not broken nor has it diminished. This war has only made us Ukrainians stronger.” Talk concerning the involvement of NATO as well as support from the European Union was also discussed.

Dr. Hill took this opportunity to liken the circumstance of the Ukrainian Army to that of David and Goliath. Even though Goliath seemed to have the upper hand, through and by God’s touch David brought down the mighty giant. The Governor was visibly touched by the word of God.

Dr. Darnell assured both Governor Osachuk and Vice Governor Artur Muntian that Church of God World Missions would continue to give assistance in every way possible to protect the children of the Ukraine and to the rebuilding of orphanages, churches and community buildings destroyed by war.

Dr. Hill encouraged the Governor and his attending staff saying that the Church of God would continue to uphold the Ukrainian nation as well as its people in prayer. Then Dr. Hill asked the question, “can I pray with you.” The Governor responded “yes.” As Dr. Hill prayed, the glory of God entered the room. It was at the conclusion of the prayer that a very significant moment took place. The Governor did a most unusual thing. He ripped the patch and stripes from his uniform and laid them before Dr. Hill. The Vice Governor followed by ripping from his uniform the patch and stripes from his uniform and placing them before Dr. Darnell. As a gesture of good will the Governor and Vice Governor were asking that we, the Church of God, would continue in prayer for their beloved country. We were later told this had only rarely been done, and then before high-ranking officials; never before United States citizens. We were also told that was the first prayer ever prayed over the Governor, his staff and the Ukraine nation in that office. A truly historical moment. A moment when God entered into the room and all walls fell. Hope replaced disheartenment and the promise of a glorious future replaced brokenness. 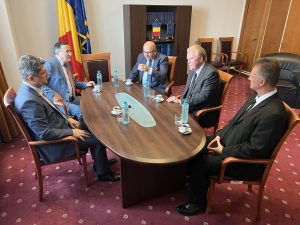 The following day, July 5, 2022 placed our team at a second meeting. A meeting even more impactful and memorable then the first. The meeting was held at the Palace of the Parliament in Bucharest, the Capital of Romania. There, Dr. Hill and I met with the Chairman of the Foreign Affairs Committee, Senator Titus Corlatean. Senator Corlatean is a wonderful friend to the more than 3,400 Pentecostal Churches of Romania of which the Church of God has enjoyed a tremendous amalgamation partnership with for many, many years.

This meeting was more strategic and precise than the first. The Romanian Pentecostal Church, through its partnership with the Church of God is recognized as the leading religious organization within Romania extending help to the displaced, the refugee and the needy of Ukraine. It was stated that during the first 10 days of the war, the Romania Pentecostal Movement was responsible for 70% of the humanitarian assistance provided to exiting refugees. Since that time between 80 and 100 vans/trucks have been employed to transport refugees as well as food, commodities and medical supplies with the Ukraine.

Senator Corlatean, a Pentecostal believer, expressed sincere appreciation to the Church of God for the overwhelming support that has been provided in a multiplicity of areas. Especially to the aid and assistance given to the orphans in extracting them from harm’s way and placing them under Christian care. Future collaboration was tentatively outlined and plans are in process as to how we might assist in the Ukrainian rebuilding projects as the war nears an end.