July 5, 2022–The opening night of the Church of God 78th International General Assembly is three weeks from today, as the Church of God’s premier gathering is set to take place July 26-29, 2022 in San Antonio, Texas, after a two year postponement due to the Covid-19 pandemic. 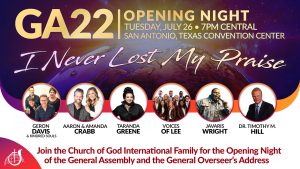 The opening night of the assembly welcomes an exciting group of special guests for a musical celebration, “I Never Lost My Praise!” Taking the stage that night will be Aaron and Amanda Crabb, Geron Davis and Kindred Souls, Taranda Greene, Javaris Wright, and Lee University’s Voices of Lee. General Overseer Tim Hill will close out the evening with a message on the Assembly theme, “The Church on Mission.” The gathering will take place and be broadcast via livestream on Tuesday, July 26 at 7:00 pm Central from the Henry B. Gonzalez Convention Center in San Antonio.

Earlier that day the General Council will officially open the Assembly as the body of ordained bishops begin deliberations on the official Agenda. Because of the postponement, the Agenda contains items that were to be addressed in Indianapolis, what was to be the site of the 2020 General Assembly. Those include several items that arose out of a series of forums that took place across the country and in seven countries in 2019. A complete “Global Forum” report will be released in San Antonio, as well as reports from several task forces put in place in 2018 and originally set to present findings in 2020.

In addition, the Agenda will contain several new items, including the first one dealing with the question of tenure for elected officials. This item will be discussed in the Tuesday morning (July 26) opening session of the General Council and then presented to the General Assembly in a special called session at 10:30 that morning. Delegates wishing to participate in that historic voting session must be registered and at least 16 years of age. The complete agenda was released on June 24 and is available for review at ga22.org.

Once the tenure issue is resolved, nominations for members of the Executive Committee, World Missions, and Youth and Discipleship leaders will take place on Tuesday afternoon, followed by elections of the Council of Eighteen, members of whom are elected by the General Council of Ordained Bishops. Depending upon the vote from that morning, either eleven or eighteen spots will be open on the Council.

Other than the business to be conducted by the General Council every day through Friday morning, other events include the popular LEAD Conference on Monday afternoon, a women’s service on Wednesday morning (both free to all registered delegates), an educator’s banquet on Tuesday, and several reunions for Church of God educational institutions. Several state and regional offices are planning gatherings, as well as boards and ministries. International Junior Talent competition begins on Tuesday and a Kid’s and Children’s Church starts on Tuesday. There will also be events for Hispanic delegates, including a Fiesta LatinoAmericana set for Thursday. A complete schedule of events will be provided at registration, which takes place in the convention center lobby.

Online registration remains open for ministerial and lay delegates planning to attend at ga22.org, the website which contains vital information pertaining to the Assembly. It can also be accessed at the denomination’s primary website, churchofgod.org.