Cleveland, TN–Bishop Asbury R. and Leola Sellers were inducted into the prestigious Hall of Prophets during a morning ceremony on October 21 at the Pentecostal Theological Seminary.

The induction was attended by several leaders who have been influential in the life and ministry of the Sellers. Among those offering remarks were former Church of God General Overseer G. Dennis McGuire, former assistant general overseer Wallace Sibley, and current General overseer Tim Hill (via video). Tributes were offered by Jennifer Porter-Cox, Carlton Campbell, and Kelvin Cobaris. Family tributes came from Reginald Sellers (son), Carl Dixon (cousin), and nephew Jeffery Holms. Special music was provided by the River Church Praise Team.

Asbury Sellers, touted as a “God-called Evangelist,” was born October 1, 1940. Bishop Sellers began his ministerial studies at Philadelphia Bible School, took courses through the Ministerial Internship at Lee College, and attended the Institute of International Studies, Washington D. C., where he received the Doctor of Humane Letters honorary degree.

In their 59 years of ministry in the Church of God, the Seller’s served as church planter, pastor, organizer, and leader. They began their pastoral ministry in Columbia, SC; planted and pastored for 26 years the Guiding Light Church of God in Washington, DC (now Capitol Church of God); and pastored the Homewood Church of God in Pittsburgh, Pennsylvania. In 1981, Bishop Sellers was invited to preach his first evangelistic crusade in Lusaka, Zambia, which began a love for Africa that would cultivate and grow over the years. 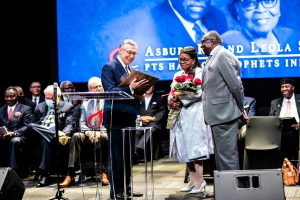 In 1986, the Church of God Executive Committee appointed Bishop Sellers as a National Evangelist; and over the next eight years, he preached 45 weeks out of the year, ministering throughout the United States and in 57 countries around the world, including the Bahamas and Central, South and West Africa. Bishop Sellers served under appointment as Administrative Bishop of New Jersey, supervising 64 cross-cultural congregations; and as Director of Evangelism–Black Ministries, establishing Partners In Ministry Conferences to strengthen smaller congregations. In 2006, Bishop Sellers was appointed by World Missions as Associate Missionary to Africa. In 2014, Sellers dedicated an orphanage and sanctuary in a poor village of Moloto, South Africa outside the capital Pretoria.

A second generation Church of God member, Leola Sellers has faithfully served alongside her husband, including State Women’s Ministries president in New Jersey; and eight years on the International Women’s Ministries Board, four of those years as the Chair, the first woman of color to serve in this capacity. Leola is a full-time soloist, ministering in concerts, conferences, prison outreach ministry throughout the USA and internationally in Zambia, South Africa, Ghana, Trinidad and the Bahamas. She has ministered at the Church of God General Assembly (1978 and 2004) and in 1994 sang at the Women’s Ministries service. She recorded her first album in 1980 and has had several hit songs, and in the January 2006 issue of US Gospel News, she was named Artist of the Month by LO Records.

The Seller’s have been blessed with five children: Meleasa, Meriam, Asbury, Ezra (deceased), and Reginald and twelve grandchildren and four great grandchildren.

President of PTS Michael Baker gave the formal presentation for the Hall of Prophets, an honor reserved for, “Pentecostal ministers whose service to Jesus Christ and the Church of God has been meritorious.” A feature of the Hall of Prophets is the establishment of a scholarship in honor of the nominees which will be a perpetual source of funding for PTS students preparing for ministry.