Those present joined with Hill and thousands of Church of God members and constituents across the Lone Star state, in giving thanks to God for a new, debt-free building, dedicated to the furtherance of the gospel.

Prior to 1962, the Church of God in the state of Texas was divided into different regions. After a unification took place, the first state office building was constructed under the leadership of State Overseer P.H. McCarn. This building still stands and serves a great function on the campground in Weatherford, Texas. In 1982, the need for a larger facility was met under the leadership of State Overseer W.A. Bingham. This building, located on the eastern edge of the property, housed the operations of the state office for decades.

The journey toward a third generation state office facility has spanned tenures of four Texas state overseers. During the tenure of State Overseer Wayne Dority and continuing through the administrations of State Overseers Les Higgins and Tim Brown, the state office worked through issues of imminent domain with the road department of the State of Texas, which resulted in the construction of a through-way along the eastern edge of the property. Shortly after the arrival of current State Overseer Toby Morgan, the State of Texas finalized their plans and the former state office building, along with several parsonages and the Centerpoint Road Church of God, were acquired to facilitate construction of the new roadway. The state office was temporarily relocated to a vacant parsonage on the campground property as plans were developed to build a new office building. 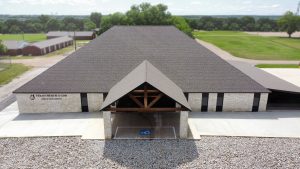 Construction began in the fall of 2019, as a new building began to rise from the earth. Despite setbacks incurred through the Covid-19 pandemic, the building was completed and occupied in May 2020. Restrictions and safety measures were employed through the remainder of 2020 and into 2021, delaying the dedication of the building.

State Overseer Morgan stated, “Now, as we celebrate the victory being experienced over a pandemic, we rejoice in the dedication of the new Texas Church of God State Office in conjunction with Texas Camp meeting 2021.”