Wimauma, Fla.–On Thursday, June 17 Carl and Beverly Richardson were formally inducted into the prestigious Pentecostal Theological Seminary Hall of Prophets. The induction was hosted during the Florida (Tampa) Camp Meeting under the leadership of Bishop Tim Brown, administrative bishop, and coordinated by Pastor John Morgan.

The Hall of Prophets is reserved for Pentecostal ministers whose ministry for Christ has been distinctive, honorable, noteworthy and meritorious. The induction establishes a fully funded endowed scholarship of at least twenty-five thousand dollars and will serve as a perpetual source of funding scholarships and support for deserving PTS students for ministry. 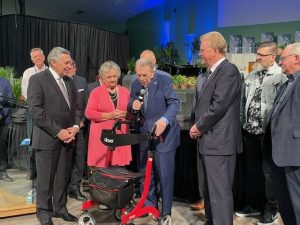 Dr. Michael L. Baker, president of PTS officiated the formal induction with ministry tributes provided by Dr. Tim Hill, Church of God General Overseer, and Dr. Billy Wilson, president of Oral Roberts University. On behalf of the seminary Board of Trustees, Baker formally inducted the Richardsons and presented them with a special plaque that chronicles their ministry of more than sixty-five years. A duplicate plaque is placed in the Pentecostal Theological Seminary Gallery of Pentecost designed to preserve the legacy of those whose consecration and dedication to God and the Church is worthy of emulation. A special luncheon was convened with many other special ministry tributes expressed by close friends and ministry colleagues.

Carl Richardson is best known for his leadership of Forward in Faith during a period when Church of God media ministry was evolving. In addition to hosting the radio ministry, he launched television specials, most notably a bicentennial celebration in 1976. He has served on the Church of God Executive Council and since leaving Forward in Faith has led a number of media and missions-related initiatives.

Congratulations to Carl and Beverly Richardson on this momentous induction into the Pentecostal Theological Seminary Hall of Prophets.