The funeral for Dr. David C. Blair, International Director of Youth and Discipleship for the Church of God, was a fitting tribute to a life and ministry dedicated to serving youth.

Hundreds gathered on Thursday, March 25 to remember the life of Blair who passed away on March 21, 2021 following a brief bout with Covid-19. The unexpected passing of the 56 year-old leader prompted a massive outpouring of remembrances and tributes on social media, as well as during the celebration of life, conducted at the North Cleveland Church of God, a place where Blair spent nine years of his early ministry as youth leader. 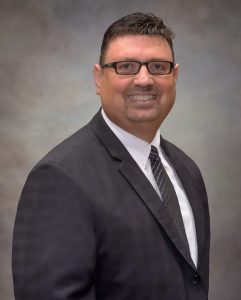 The memorial service followed three hours of viewing where, among others, dozens of state youth and discipleship directors traveled to Cleveland to honor their leader. Opening the ceremony was Rev. Eddie Jones, who reflected on years in the early 1990s as a member of Blair’s original youth group at North Cleveland. Secretary General of the Church of God, John D. Childers, who had a close working relationship with Blair, shared a lifetime of “Blairisms,” quips and quotes attribute to the late leader. Childers also reflected on his personal friendship with a colleague who shared many of the same leadership roles.

David Blair’s brother-in-law, Rev. Brett Jarriel, represented the Blair family. He was followed with a tribute by Church of God General Overseer Timothy M. Hill, who, like Childers, spoke of the loss of not only a powerful and effective working relationship and contributions by Blair to the Church of God, but of a personal friendship as well.

The celebration of the life of Dr. David Blair concluded with a keynote message from Rev. Kevin McGlamery, a member of the International Executive Council for the Church of God. McGlamery was a student representative on the committee which chose to hire Blair as youth minister at North Cleveland, a post which connected him with leaders who helped establish highly-successful Winterfest event. McGlamery reflected on Blair’s lifelong mentorship to him and the legacy Blair has left on the Church of God.

Special music was provided by Jason Crabb, Rev. Ryan wilson and a special reunion of “Harvest,” a musical ensemble led by Danny Murray of which David Blair plays bass guitar.

David Blair was preceded in death by his mother, Jo-Ann Carlton Blair, who passed away last year. He is survived by his wife, Janet, and their two children, Brittani and Bruce, daughter-in-law, KaLea Blair, and grandson, Charlie Blair. He is also survived by his father, Rev. Charles Blair. A tribute page, which includes a complete obituary, will be available until April 1 at churchofgod.org. To view the Celebration of Life service, visit facebook.com (@COGHQ).