March 9, 2021–Cleveland, TN–General Overseer Tim Hill hosted officials from the Dixon Pentecostal Research Center today to present original sermon manuscripts of his, and his late father, Rev. J.W. Hill. The donation will be added to a growing collection of sermon materials housed at the DPRC.

Hill reminisced about his father as the inspiration for much of his own sermon material. Among the presented items were sermon outline books, written and typed by J.W. Hill himself.

“He wrote out everything, where he preached a particular sermon, inked notes in the margins and then kept it all,” Hill stated. “He also gave himself a grading system which would guide him in deciding what sermons would be most appropriate for the thousands of sermons he preached over his lifetime.” Along with his father’s manuscripts, Tim Hill presented his own personal sermon notes, primarily from his early days as a pastor in Danville, Virginia, and other materials including lyrics, books, and CDs related to his life as a gospel music writer and singer. 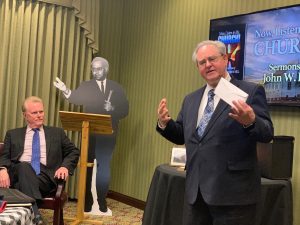 Dr. David Roebuck, right, accepts the donation of sermon outlines and other material from General Overseer Tim Hill, seated. A life-sized cutout of J.W. Hill is at the podium (click photo to enlarge)

“Pentecostals take seriously Paul’s question in Romans 10:14: ‘how shall they hear without a preacher?’” stated Dr. David Roebuck, director of the DPRC. “The Dixon Pentecostal Research Center is honored to receive the sermon manuscripts of Church of God General Overseer Tim Hill and his father, John W. Hill. Tim Hill is one of the most significant Pentecostal preachers of our time; and no doubt John Hill was the most important influence on the preaching of his son. These sermons will be a vital resource for anyone wanting to know what Pentecostals believe and preach.” Roebuck stated that the Hill sermons will be added to the printed and recorded sermons of other Pentecostal giants, including Ray H. Hughes, Wade H. Horton, W.L. Ford, Margaret Gaines, James L. Slay, Paul L. Walker, F.J. May, and many others, “as they enhance the significance of the Research Center and our mission to preserve the voices of global Pentecostalism.”

Hill presented the material at a luncheon attended by members of the International Executive Committee, Roebuck, DPRC Archivist Gene Mills, and others. Having celebrated the 50th anniversary of the Center’s founding earlier this month, the DPRC is now into its second half century. Hill acknowledged part of the impetus to hand over his and his father’s personal papers at this time was the commemoration of the DPRC’s founding on the campus of what was then Lee College by the late Charles W. Conn. Since then the Center’s work has reached around the world in gathering historical papers, books, and items related to the Pentecostal movement.