Cleveland, TN–The Dixon Pentecostal Research Center is celebrating 50 years of ministry to the Church of God and Pentecostal/Charismatic Movements on March 2, 2021. Founded under the leadership of Charles W. Conn on the campus of Lee University, the center is one of the world’s largest repositories of Pentecostal publications, documents, and artifacts. Along with its extraordinary growth, the center has expanded its mission to preserve Pentecostal voices as it seeks to fulfill the biblical mandate of Psalm 78:4: “We will tell the next generation about the glorious deeds of the Lord. We will tell of his power and the mighty miracles he did” (NLT).

The Dixon Pentecostal Research Center (DPRC) began in 1971 as a special collection in the Lee College Library. Library Director LeMoyne Swiger and her staff had assembled a collection of books by Church of God authors. When Charles W. Conn became president of Lee College in 1970, he saw the potential of developing a leading research library documenting the global Pentecostal movement.

Conn was uniquely positioned to understand the value of a research collection. While he was serving as editor in chief of Church of God publications, denominational leaders commissioned him to write the movement’s history. Like a Mighty Army appeared in 1955 and established Conn as the denomination’s historian and an important voice in the Pentecostal Movement. Following his tenure as Church of God general overseer, Conn became president of Lee College in 1970.

In response to President Conn’s vision, the college created the PRC, raised a budget, moved its Pentecostal books to a designated room, and hired a part-time director. Desiring to build a collection “as nearly exhaustive as possible,” Conn challenged the Church of God and Pentecostal Movement “to preserve for future generations those things of the past that have made us what we are.” 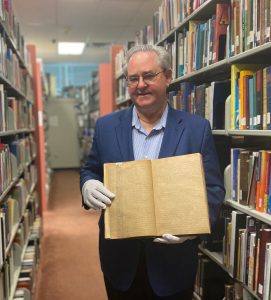 The Church of God General Assembly adopted this vision to preserve Church of God and Pentecostal heritage in 1980. President Conn, along with Church of God School of Theology President Cecil B. Knight and General Overseer Ray H. Hughes proposed to plan to construct a facility that would include a library to serve both educational institutions along with the PRC. The General Assembly approved the proposal, and the building that houses William G. Squires Library and the Hal Bernard Dixon Jr. Pentecostal Research Center was completed in 1985. Adding to its mission as a world-class research library, the Church of God designated the DPRC as the archives of the denomination.

Under the directorship of Dr. David G. Roebuck, the DPRC has increased its emphasis on sharing the Pentecostal heritage with the Christian community through teaching, historical exhibits, publications, and an annual Azusa Lecture. Dr. Roebuck teaches at Lee University and the Pentecostal Theological Seminary and is available for local church heritage services. The center works closely with the Church of God Historical Commission to design and create a major historical exhibit and accompanying publication for each Church of God General Assembly. Its most recent exhibit, “Rightly Dividing the Word of Truth: A Century of Church of God Education” is available for public viewing at the center. Since 2006, the center has sponsored an annual Azusa Lecture and presented the Spirit of Azusa Award to celebrate the rich heritage of the Pentecostal Movement.

Serving alongside Roebuck, the Reverend David “Gene” Mills, Jr. is archivist at the center. Mills’ educational experience includes advanced graduate studies in American religious history, philosophy of religion, and theology. He has taught at numerous educational institutions and was president of Discipleship College in Eldoret, Kenya.

In commending the DPRC for 50 years of ministry to the Kingdom of God, Church of God General Overseer Timothy Hill announced that he is donating the original manuscripts of his father’s sermons as well as his own sermons. Regarding his father’s sermons, Hill noted, “I can’t think of a better way to utilize the messages as to make them available in the Dixon Pentecostal Research Center for anyone that may come and use them at any time in their own research.”

Offering his congratulations, Lee University Chancellor Paul Conn stated, “The Pentecostal Research Center is something that we at Lee are really proud of. We are glad that it is here, and we are proud of its growth and its effectiveness serving scholars and church people over all these years…. It has become a very valuable asset and resource for the Church of God at large, for the Pentecostal movement around the world, and for all scholars who care about the Pentecostal Movement and want to know more about it.”