Walker, perhaps best-known for his nearly 40-year leadership as pastor of the Mt. Paran Church of God in Atlanta, was elected to the highest office of general overseer for the Church of God in 1996. In a non-traditional move, Walker’s ministerial colleagues elevated the popular leader to the post straight from the pastorate at the general assembly of 1996. Walker served the full term of four years, from 1996-2000, being re-elected general overseer in 1998.

Born in Minot, North Dakota, Walker was called to the ministry in 1950 and attended Lee College (now Lee University) where he received an associates (A.A.) degree. He continued his education at Presbyterian College (B.A.) and eventually earned an M.Div. from Emory University, and an M.Ed. and Ph.D. from Georgia State University.

He began his ministry with the Church of God serving as State Sunday School and Youth Director of California from 1955-1959, and one year in the same post (1959-1960) at Tennessee. 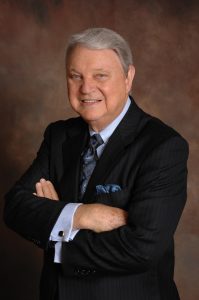 In 1960 Walker accepted the pastorate of the Hemphill Ave. Church of God in Atlanta, Ga. In the 37 years between his appointment and election as general overseer, Walker led the church to become one of the largest, most prominent and progressive congregations in the Church of God. The name changed to Mount Paran when a new church was built on Mount Paran Road in 1967. The church underwent several building programs, including a large family life center and even a parking garage to accommodate the thousands who attended. In 1997 the church appointed Walker “Pastor Emeritus” where he served in the role until his passing.

Following Walker’s tenure as general overseer, he became Chancellor of Education for the Church of God, serving four years in the role until being re-elected to the International Executive Committee of the Church of God as third assistant general overseer in 2004. He served two years in that role and was elected secretary general in 2006 where he served for two additional years.
Paul Walker was one of the more prolific members of the International Executive Council. First elected in 1978, he was a member of the church governing body for a total of 20 years, including his years on the Executive Committee.

He is the author of eight published books and has received numerous recognitions, both within the Church of God and across the Evangelical spectrum. He has also been recognized for awards in education from his alma maters, and within the Atlanta community.

Paul Walker wed Carmelita in 1952 and they were married for 68 years. They were the parents of two sons. Paul Dana Walker had just been hired in the psychology department at Lee College when he was tragically killed in an auto accident in 1982. His name graces the athletic arena at Lee University. Their second son, Mark, currently serves as president of Lee University.

General Overseer Timothy M. Hill stated, “I learned much from Dr. Walker through his books and sermons originating from his pastorate at Mt. Paran. To be able to sit with him for four years on the Executive Committee is a cherished experience that I shall always remember. His work and ministry as General Overseer of the Church of God was anointed by the Holy Spirit and brought strategic direction to our movement. My thoughts and prayers are with the Walker family as we honor the memory and ministry of this wonderful Champion of the Faith.”