Nahuway served for ten years as the elected General Overseer of GEREJA BETHEL INDONESIA, the official Indonesian partner denomination of the Church of God, where he led its 3 million members of the Indonesian church in seeking to finish the Great Commission across Indonesia and into 26 other nations.

By virtue of his position within the Indonesian movement, Nahuway was a representative on the Church of God International Executive Council, where he served between the years of 2005-2015. The Full Gospel Church of South Africa has a similar arrangement. 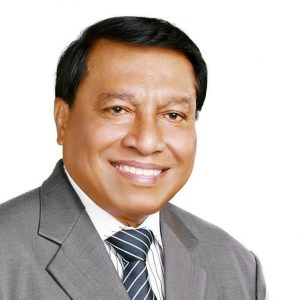 Brother Nahuway began his ministry when he attended Bethel Seminary, the 1968 Church of God YWEA project. In 1979, he became pastor of Gereja Bethel Indonesia “Mawar Sharon” (Rose of Sharon) congregation in Jakarta, with only 27 adults. The congregation eventually grew to the church it is today with a building that seats over 10,000.

Pastor Jacob served as chairman (2013-2018) of the Pentecostal Fellowship of Indonesia and General Secretary of the inter-denominational Board of Asian Missions.

Nahuway is survived by his wife, Rina, and three adult children and spouses, and several grandchildren. His oldest son, the Reverend Yohanes Nahuway, has been officially installed as the new lead pastor of Gereja Bethel Indonesia Mawar Sharon.

“Jacob Nahuway was a dynamic leader for Indonesia and the Church of God,” stated General Overseer for the Church of God Tim Hill. “He provided steady representation to the Executive Council where his input brought wisdom and was appreciated.”

“Indonesia and Gereja Bethel Indonesia has lost a hero and a pioneer,” stated Tommy Smith, missionary to Indonesia and close colleague of Nahuway. “Our prayer is that the Holy Spirit will bring comfort, peace and strength to the Nahuway family.”