Chaplain Dawn Ashley has become the first woman to represent the Church of God as a U.S. Navy Chaplain. She joins the ranks with other ordained women serving in the U.S. Army and Air Force as military Chaplains. Achieving this milestone required faith in the Lord and determination to fulfill her calling. Chaplain Ashley recently shared her testimony to give glory to God. 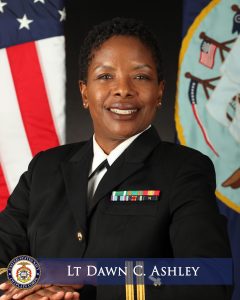 When God gives you a dream, He will provide what’s needed to make it a reality. From unexpected funding, to connecting you with just the right people, He will make the seemingly impossible possible. Navy Chaplain Dawn Ashley speaks to all going through career transitions or pursuing their dreams, assuring that God is faithful to those who trust Him, and is working behind the scenes in ways we often can’t understand. Her own journey to Chaplaincy was full of obstacles, but she sees now how each was an opportunity for growth, and has only made her story more incredible.

“I believe the Lord allows us to experience difficulties for our growth and to increase our faith, and that when we go through dark valleys, our Heavenly Father will more than make up for it,” Chaplain Ashley encourages.

Her introduction to Vocational Chaplaincy was bittersweet. She was set to attend a fateful conference the day before her grandmother’s funeral, over 1,000 miles away. Providentially, she received funds for a ticket and was able to attend both. There, she connected with the recruiter who would introduce her to Chaplaincy. Her passion had always been for ministry, and after 25 years as a mental and behavioral health professional, she felt the Lord leading her towards full-time ministry. While at Officer Development School, she met students who were Chaplains, and realized this was her calling.

Pursuing military Chaplaincy while working full time as an active duty social worker was no easy feat, and there were many naysayers who believed it would be too big a challenge. With encouragement and guidance from Drs. Richard and Brenda Pace, however, she was able to go before the U.S. Navy CARE Board for an interview. Devastatingly, she wasn’t selected. Instead, she was advised to get senior pastoral experience, which would translate into taking over a pastorate in Germany, her most difficult assignment yet. She concurrently took CPE classes online in US time, logging in from midnight to 3:00 am.

“You have to do whatever is necessary and take risks, trusting in God even when it seems crazy”, she encourages. The support from her family and mentors such as Richard and Brenda Pace kept her going, and in 2019, she started the application process again. This time, the policies had changed; she no longer qualified. She wrote to Dr. Pace to break the news, questioning why God would lead her this far only to close the door. Together, they wrote another letter to the new Navy Chief of Chaplains, and she sat before the CARE Board again. A month later, she got the call that she was selected.

Dawn compares her path to a mountain climber facing the zenith. While she may have some “bruises and broken bones”, she feels like she’s finally reached the peak. After graduating from Chaplain School and taking her oath of office with her family and the Paces, she began her new assignment in Marine Corps Recruit Depot Parris Island on September 17. She loves serving recruits, and says she’s living her dream job at age 52 through this second career. We’re honored that she has joined our Chaplain team and is the first woman to become a Church of God Navy Chaplain!