Dr. James O. Davis, founder of the Global Church Network, has announced Dr. Larry G. Hess will be joining the GCN team as Executive Director of the Global Hubs of Christianity, where he will provide strategic leadership in the formation and deployment of all future Hubs of the GCN. Additionally, he will oversee and organize all planned Hubs and Finish 2030 Summits that are scheduled worldwide in 2021 and beyond, while interfacing and interconnecting with key Christian leaders throughout major streams of Christianity.

Hess currently serves at the Church of God International Offices as International Liaison/Trainer for Spiritual Renewal and Transformation. He will continue in this role along with his new assignment with the GCN. Hess has previously served as state overseer of Mississippi, European & Middle East Field Director for Church of God World Missions, and International Director of Ministerial Development. Most recently he served in the president’s office at the Pentecostal Theological Seminary. 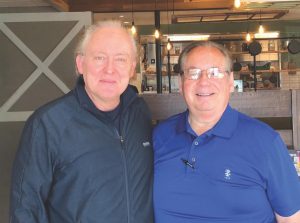 Dr. Tim Hill, general overseer of the Church of God, states, “I am thrilled to know that Dr. Larry Hess will be serving in this special partnership between, the Church of God International Offices and the Global Church Network. I cannot think of a better leader to serve in the Global Hubs of Christianity. Dr. Hess brings a global worldview combined with excellence in training and education to help equip church planters and pastors throughout the body of Christ. We look forward to our ongoing synergistic relationship between the Global Church Network and the Church of God on behalf of the FINISH 2030 vision.”

The Global Church Network was founded in 2002 in Orlando, Florida. Since its birth, the GCN has grown to more than 2,700 different denominations and organizations and more than 700,000 churches worldwide. GCN is synergizing and mobilizing the entire body of Christ toward the fulfillment of the Great Commission by the two-thousand-year birthday of the church in 2030.

Davis states, “Dr. Hill and I have synergized our efforts together for many years, towards the completion of the Great Commission in our generation. Together, we were fortunate to launch FINISH 2030 at Castle Church, Wittenberg, Germany, On November 1, 2017. At the gravesite of Martin Luther, the founder of the protestant reformation, we committed to find, intercede, network, invest, send, and harvest through 2030!

According to GCN officials, one of their more innovative and strategic methods to complete the Great Commission is the Global Hubs of Christianity, which were first launched in 2014 with founding Pastor David Sobrepena at Word of Hope in Manila, Philippines. A Global Hub synergizes the best relationships, systematizes training, and strategizes for unreached people groups. Additionally, the Global Hubs of Christianity will provide facilitation of expedited Bible translation for the remaining unreached people groups in the years to come. Currently, GCN has more than 90 Hubs strategically placed throughout the Body of Christ. GCN estimates there will be at least 200 Hubs by 2022, and 800 by 2030.