In a year where events and history appear to be dictated by the COVID-19 pandemic, Church of God Women’s Ministries celebrated a highly successful two year period of activities and support for an international project. 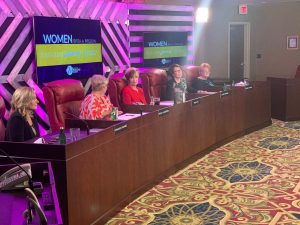 Following greetings by General Overseer Tim Hill and WM liaison John Childers, the women’s leaders conducted the meeting as they would had the ceremony been held in person at the International General Assembly, originally scheduled for July 21-24, 2020, but postponed to 2022 due to COVID-19. After a video depicting highlights of the past two years, each of the Advisory Council members offered greetings. Paula Hill then expounded on the 2018-2020 WM project, funding the House of Cherith at the City of Refuge in Atlanta. A video depicted the story of the project, which will house women and their children seeking to escape sexual exploitation. The original goal of $500,000 was exceeded to over $600,000, allowing for a ribbon-cutting ceremony earlier this month.

The highlight of the evening was the presentation of award winners who helped reach the final total of $601,665.60. The following lists the winner and runner up for states/regions by category (smallest to largest), leader, and per capita giving:

The overall winner and runner up representing the highest in giving were runner-up: South Carolina, Wanda Rabon giving $37,306.33, and the winner: North Georgia, Charla Madden giving $123,856.

In closing Paula Hill announced that the House of Cherith would continue to be the project going forward into the 2020-2022 Assembly period. Another $500,000 goal was set to help fund House of Cherith Jr., to assist children between the ages of 11-17 who are victims of sexual trafficking and exploitation.

“The Women of the Church of God have a history of stepping up and making things happen in a big way,” according to Paula Hill. “These two back-to-back projects are giving hope to victims who might not otherwise be able to get off the streets and out of danger. The House of Cherith is changing lives on a daily basis and Women’s Ministries is proud to partner with them.”