This is the second time that the governing body of the Church of God has gathered virtually due to the COVID-19 pandemic. Last April the Council spent two days in session via Zoom where they arrived at the historic decision to postpone the 2020 General Assembly, originally scheduled for July 21-24, 2020 in Indianapolis. The decision to postpone was also because of the worldwide pandemic. 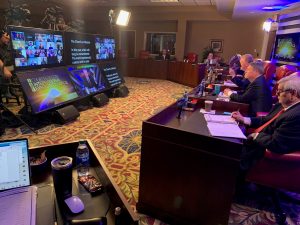 The International Executive Council, which consists of the Council of Eighteen and the five members of the International Executive Committee, is moderated by General Overseer Timothy M. Hill. After an opening scripture and prayer, Hill moved into financial reports from Business and Records Director Raymond Hodge and Art Rhodes, president and CEO of the Benefits Board. Both presentations were filled with positive financial news despite the worldwide shutdown of churches and financial markets. The Financial Review Summary reports were moderated by Secretary General John D. Childers.

An follow-up report from the Executive Council General Assembly Task Force was presented by Task Force Chairman Mark Williams. He was followed by a “Special Order of the Day,” welcoming Dr. Paul Conn, now chancellor of Lee University. The former president offered his reflections and thanks to the Council following 34 years as president, which concluded last month.

The remainder of the Council agenda consisted of traditional reports reserved for the Council, followed by an announcement by General Overseer Hill introducing the appointments of three administrative bishops to Pacific Northwest (Pat Wright), Alaska (Jeff McGirt) and Florin Cimpean (Romanian Territory), as well as Sam Salyer, coordinator to the Southwest Indian Ministries. While other overseer appointments remain in place until 2022, these positions were filled due to previously announced retirements.

The next meeting of the International Executive Council is scheduled for January 2021.