Cleveland, TN—One of the Church of God’s well-known congregations is taking the four Sundays in June to dedicate a new facility built on the site of a former golf course.

Westmore Church of God, founded in 1968 in Cleveland, Tennessee, was until earlier this year located within sight of the Church of God International Offices. The 700-seat sanctuary, educational building, and parking lot was housed on four acres just off busy 25th Street. For the last several years, overflow parking had been across 25th Street with the church offering shuttle service every Sunday.

In the late 1990s, the church’s expanding ministries, increasing congregation, and landlocked property, presented a need for relocation to a “campus” setting with multiple acres for future growth. Seventeen acres was purchased on the west side of town under the leadership of previous pastor, the late Dr. David Bishop. In 2000, Kelvin Page assumed the pastorate and launched a campaign to construct a youth facility, the first building in anticipation of eventually relocating the campus. The OneEighty youth center was completed in 2003. 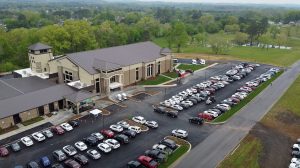 Three years later, the former Rolling Hills Golf Course, located just off Exit 25 of Interstate 75, was put up for sale. The 175-acre property offered a beautiful setting for a potential future campus devoted to “reaching the generations.” The church voted to buy the property for $2.2 million in April 2006 and leased it back for one year. Westmore took possession of the property in 2007 and began a plan for infrastructure of roads, utilities and building sites.

With the purchase of an expansive property featuring enough useable acreage for a much larger vision, the 17-acre site, including the three year-old OneEighty, was sold to a local congregation in 2007. In addition, several parcels of the 175 acres were also sold to local developers, leaving approximately 100 acres, including a prime site along the Interstate. The sales more than paid for the purchase of the golf course and offered funds toward future ministry and campus construction.

In a vote that altered a previous timeline for property development, the congregation chose to conduct a capital campaign and build a replacement youth facility, ahead of a new sanctuary and children’s wing. The 16,000-square foot, 300-seat “Student Ministries Center,” was dedicated in 2016. Within a few steps of the new facility, it also offers overflow seating and parking for Sunday services if necessary.

In 2017, the former Westmore church site, located at the corner of 25th Street and Wolfe Drive, was sold to a non-profit agency, which leased it back to the congregation until the move to the new site, now located on Legacy Parkway. Westmore occupied the former site for 52 years after its establishment in 1968 through a partnership with the North Cleveland Church of God to begin a church to serve residents on the “west” side of Cleveland.

Developers with like-minded vision to “reach the generations” came along in the years to follow. In 2008, ground was broken on ten acres and developed into Heritage Place, a neighborhood for active 55+ seniors. Today all 36 one-level townhomes are occupied. On nine acres of the original 175, Legacy Village, an assisted living and memory care facility was dedicated in 2018. Ground has been broken on a community greenway that will follow Candies Creek on the property. More plans in cooperation with the city and other investors are ongoing.

The new Westmore worship facility features a full children’s ministry wing, courtyard, playground, prayer tower, commercial kitchen, choir rehearsal room, more than a dozen classrooms, expansive lobby and gathering area, and a 1200-seat sanctuary. It is equipped with the latest in security, video and electronic technology, including a massive 22′ X 12′ LED wall and digital message boards throughout the facility.

The new campus was originally scheduled to be dedicated on Palm Sunday, but the onset of COVID-19 delayed the opening until May 31 when the local congregation was welcomed in limited numbers for the first time. Sundays to follow included invitations to community and government leaders and a focus on the Church of God. The final Sunday of June will feature a message from General Overseer Tim Hill and a July 4th weekend celebration with Voices of Lee.