The spontaneous gathering was appropriately staged in the Church of God Prayer Garden on the International Offices campus.

Hill opened the meeting with a reference to II Chronicles 7:14: “If my people who are called by my name will humble themselves and pray and seek my face and turn from their wicked ways, then I will hear from heaven and will forgive their sin and heal their land.”

Reading from a resolution adopted by the General Assembly in 2000, Hill reaffirmed the core message condemning any form of racism and bigotry within the body of Christ. He then called upon several individuals who offered up 3-4 minute prayers. The following are portions of those prayers:

David E. Ramirez, third assistant general overseer: “Fill our hearts with love for you and our neighbors, so we may heal the sin of racism.”

Kevin Brooks, mayor, City of Cleveland: “We seek your face for the healing of our land.”

Bill Lee, evangelist: “We are wrestling with invisible enemies who have invaded our land and we need you now…forgive us of our silence which is consent to those around us…Fulfill the prayer that we would be as one and heal our land.”

Pamela Brewer, director, Women’s Discipleship: “You have brought us here together; search our hearts to see if there is any wicked way within us, and set us free from the sin of unforgiveness.” 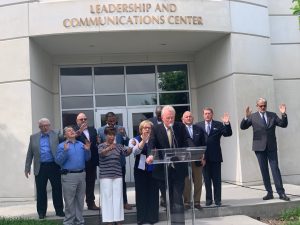 Fijoy Johnson, pastor, Chattanooga, Tenn.: “We stand in awe of the beautiful races You have created in Your image; You shed your previous blood for all of us and we pray you will restore and give us a heart for You.”

David Griffis, director, Church of God World Missions: “I am overwhelmed when I think of the colors and cultures of our 7 million+ members around the world… but we are one!”

In closing, Hill called each participant, as well as the Executive Committee and local pastoral representatives, for a corporate prayer.

A portion of the prayer gathering will be available as a video on the Church of God Facebook page late in the afternoon of July 5 at facebook.com/COGHQ.