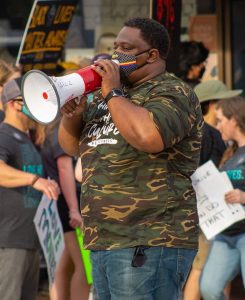 “When I found out that a large protest was being organized in the city, I immediately contacted Demetris, a fellow Church of God pastor, who also serves as our city’s Director of Public Works,” Schrade stated. “Together we teamed up to help steward the direction into a prayer and protest event with the organizers.”

Schrade explained that several hundred people turned out to pray, as well as protest peacefully, with a motto of “no violence!” Schrade and Presley along with other ministry leaders in DeLand are helping guide the city’s response and healing moving forward.

According to an article reporting on the event from the DeLand Beacon, the group read out names of people who have been victims of police violence. Their efforts were supported by DeLand police, whose officers stopped traffic in both directions on the two highways to allow the protest to continue safely. The newspaper reported no arrests or injuries during the protests, which stretched from Woodland Boulevard to the DeLand Police Department. 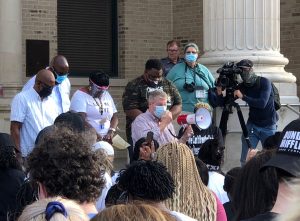 “This is a day I will never forget,” the Beacon quoted Mitzi Caine, a West Volusia business owner, as stating. “Being a part of a peaceful protest against inequality and police brutality against black people and people of color was just amazing. First time in my life I ever took part in something so empowering!”

“There are two other things that make this a special story for this time,” Schrade continued. “The Church of God pastor I worked with, Demetrius Presley, is black. I am white. Demetris works under the under the Church of God-Cocoa office (Anthony Pelt, administrative bishop), while I am under the Tampa office (Tim Brown, administrative bishop). But in this crisis, no matter our skin color or labels, we came together for the Lord and the good of our community.” Schrade went on to praise Presley’s role during the rally as highly responsible for helping keep the protests peaceful due to his relationships with the organizers.

Schrade expressed his hope that other examples of Church of God ministers will arise from this current climate, examples of uniting people, “instead of the devil’s intention to divide us,” he said.

“My prayer is that what Pastor Presley and I experienced in DeLand will be an inspiration that Church of God pastors and leaders can make a difference in their cities by guiding their communities through these challenging times.”