The hour-long program originated from the Leadership and Communications Center studio and featured greetings from a number of friends of the Church of God, beginning with Bill and Gloria Gaither who fondly reminisced their story authoring the song, “Because He Lives.” General Overseer Tim Hill then returned live to the studio where he and singers sang the memorable hymn. Other video guests throughout the program included Pastor Kenneth Ulmer, vocalist Jason Crabb, and Evangelist Tony Suarez.

Adding a bit of nostalgia, two excerpts from the popular Voices of Heritage series were shown, including the late Missionary Margaret Gaines and former General Overseer Ray H. Hughes, Sr. 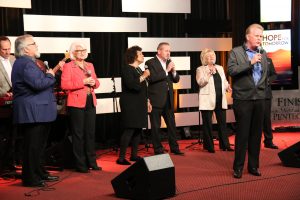 The musical highlight of the evening was a reunion gathering of the original “Harvest” musical group, led by Danny and Debbie Murray. Other members returning for the reunion concert was Judy Jacobs Tuttle, Jim and Kathy Milligan, James White, Kevin Kelley, David Blair and Jamie Tuttle. The group performed such memorable tunes as “My God Is Real,” “The Champion Has Come,” Light at the End of the Darkness,” and “Amen.”

Evidence of the popularity of the livestream was demonstrated as more than 80,000 unique viewers tuned in to the broadcast. There were more than 4,000 comments received and it was shared over 7,000 times.

Hosted by General Overseer Tim Hill, he introduced and interacted with each of the guests and brought words of encouragement during this trying time of history. Commenting on his experience earlier in the day virtually visiting several congregations, he said, “I was blessed as thousands engaged online with our churches as they offered services via livestream and on-site in parking lots. You made technology your friend and found ways to continue the dissemination of the gospel message.”

The livestream closed with prayer by Secretary General John D. Childers who uplifted requests that came through during the event.

Hope for Tomorrow is available for archival viewing at the Church of God Facebook page, COGHQ.