Jerusalem, Israel—a pilgrimage to the Holy Land by 78 participants continues with a delegation led by Church of God General Overseer Tim Hill and other members of the Executive Committee.

The tour began on Tuesday with stops around the shores of the Sea of Galilee. Sites included Capernaum, the Mt. of Beatitudes, the ruins of Magdala and a boat ride. The day ended with a visit to the Voice of Hope radio ministry and an outdoor worship service at the local community center (see Faith News article earlier this week).

On Wednesday, the day began with a drive to the Golan Heights, and an informative exhortation of the strategic importance of the site as it relates to the defense of Israel. Another highlight was a visit to Caesarea-Philippi, the place Jesus referred to in Matthew 16:18 when he said, “And upon this rock I will build my church and the gates of hell shall not prevail against it.” The stop was just one of several that have made scripture come to life for the delegates.

On the way back to Galilee, the tour made a stop at a children’s home, one of many that were supported by the Israel Initiative, a project of the Church of God several years ago. The second day ended with a late afternoon baptismal service on the Jordan River. Over 30 delegates experienced a refreshing of their spirit in the Jordan as General Overseer Hill prayed a prayer of renewal for each.

On Thursday the tour departed the Galilee headed for Jerusalem. On the way the delegates experienced a breathtaking view of the Jezreel Valley, another scripturally-relevant site that told the story of the past, but also a prophetic look at the future of Armageddon as portrayed in the book of Revelation. There was a short visit to the ruins of Bet Shean,  an ancient city with thousands of years of history. Thursday’s events were capped with a glorious arrival into the city of Jerusalem and a visit to the Western (Wailing) Wall and the Rabbinical tunnels.

The ancient Southern steps of the Temple of Jesus’ time was the setting for a Friday morning worship service. Scripture reading was led by John D. Childers, followed by prayer from J. David Stephens. Vocalists Angie Primm and Jonathan Sawyer led powerful praise and worship and Dr. Hill preached an anointed message. Delegates participated with words of prayer, praise, and worship.  The remainder of the day was filled with visits to several sites in the Old City of Jerusalem, including the Jewish and Christian quarters, the Upper Room, site of the Last Supper, and the Temple Institute.

The last two days of the Journey of Pentecost Tour will include an excursion to experience the Mount of Olives and Garden of Gethsemane site, the House of Caiaphas, Pool of Bethesda, Garden Tomb and Caesarea. The delegates will also participate in a Sunday worship service before departing back home on Monday. 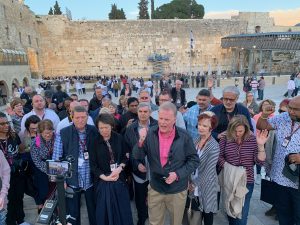 General Overseer Tim Hill leads a special #WePrayCOG video excerpt in front of the Western Wall with participants of the Journey of Pentecost Tour.