Minutes of all but the most recent International General Assembly are now available online at no charge. The Dixon Pentecostal Research Center, Church of God Communications, and the Consortium of Pentecostal Archives (CPA) have partnered together to make this significant historical record of Church of God General Assemblies accessible to the public at www.pentecostalarchives.org.

The first Church of God General Assembly met 114 years ago this weekend, January 26-27, 1906, in a private home in the Camp Creek community of North Carolina. Pastor A.J. Tomlinson moderated that Assembly and later printed the minutes of that meeting as a tract. With some exceptions, the General Assembly met annually until 1946 and biennially since that time. Now known as the Church of God Book of Discipline, Church Order, and Governance, the Minutes contain a record of the business conducted at each Assembly as well as a compilation of past decisions that continue determining the doctrine and polity of the church. Having them available online allows anyone to review the historical development of Church of God doctrine, practices, and ministries since the first Assembly. 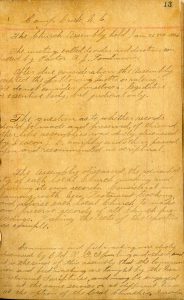 As the archives of the Church of God, the Dixon Pentecostal Research Center is preserving the earliest handwritten records as well as the printed Minutes of every General Assembly. According to Dr. David Roebuck, Church of God historian and director of the Dixon Pentecostal Research Center, the center is increasingly working to make historical records available online. While the Research Center is having older records scanned, Church of God Communications Director David Ray made digital copies of more recent volumes available to the Center. The current edition will continue to be available in print and Kindle formats through Pathway Press at pathwaybookstore.com.

The Dixon Pentecostal Research Center networks with the Consortium of Pentecostal Archives to make historical records of the Pentecostal Movement available to scholars, students, and the public. According to Roebuck, representatives of several Pentecostal denominations began collaborating about a decade ago to create an online site where member denominations and ministries could make their historical records available at no charge. Roebuck, who served as the first chairman of the CPA board, praised the vision of Darrin Rodgers, Director of the Flower Pentecostal Heritage Center in Springfield, Missouri, and the willingness of the Flower Pentecostal Heritage Center to host the site as well as assist with scanning in many cases.