Cleveland, TN–Leonard C. Albert, consultant for Personal Evangelism and Mission North America for the past nine years, was honored for his more than 45 years of service at the Church of God International Offices. The recognition took place during a chapel service with the International Offices staff on Wednesday, November 6.

Albert has had a most unique ministry with the Church of God, serving in a non-credentialed role alongside ministers, leading multiple programs and initiatives for those called to lay ministry. A native of Maine, Albert was appointed by the National Laymen’s Board as field director for the Office of Lay Affairs in 1974—his first appointment with the Church of God. He
served in the Lay Ministries Office, leading it for 36 years under the titles of Secretary of Lay Affairs and Director of Lay Ministries.

Dedicated to a lifetime for winning the lost, Albert testified of his personal salvation to the Lord by his wife-to-be, Pat, after returning from Lee College, now Lee University. Albert then enrolled at Lee College himself, where he met Dr. Charles Beach, a well-known leader of the popular campus organization, Pioneers for Christ. While leading the Lay Ministries Department, Albert established the Hall of Christian Excellence to recognize outstanding local lay leaders and raised $465,000 to launch the Charles R. Beach Endowment Fund for personal evangelism. 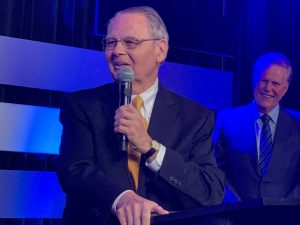 Leonard Albert responds to the presentation on November 6, 2019, while General Overseer Tim Hill looks on

During the presentation to Albert, Assistant General overseer J. David Stephens called Albert, “one of the most influential leaders of the Church of God.” He then listed a few of the many programs Albert began and led including Evangelism Breakthrough, School of Lay Evangelism, Pastors Prayer Partners, Consultation on Lay Ministries, National Laymen’s Day, and Resurrection Breakfasts.

One of the signature programs under Albert’s leadership was the rapid growth of the LifeBuilders Men’s Ministries program. During his tenure, Albert tripled the number of local chapters from 700 to more than 2,300 between 1974 and 2010. During the period there were multiple LifeBuilders events held across the nation.

While leading Church of God Lay Ministries, Albert authored, published, and recorded more than two dozen resources, releasing all profits back to the Church of God to fund projects, events, and resources.

Well known for his speaking ability, yet not a credentialed minister, Albert delivered what he termed, “spreaches,” combining preaching with speaking. He delivered more than 8,200 of those “spreach” sermons in 51 countries, all 50 U.S. states, and in nearly 4,000 churches and conferences globally.

Albert accepted a framed “Resolution for Distinguished Leadership,” signed by the Church of God Executive Committee and presented by Stephens. Church of God General Overseer Tim Hill and his wife, Paula, recognized Albert and his wife, Pat, during the chapel service, presenting Mrs. Albert with a bouquet of roses.

Members of the Church of God International Executive Committee expressed, “unmatched appreciation to Leonard Albert for his exceptional accomplishments…and commend him for his commitment and devotion to Spirit-empowered influence and leadership excellence of men and women in both lay and credentialed ministry around the world.”

“The Church of God gives highest honor,” the resolution continued, “to Leonard C. Albert for his dynamic leadership and groundbreaking accomplishments blended with spiritual vision that have manifested in outstanding achievements over the past 45 years from 1974–2019.”