Cleveland, TN–The Dixon Pentecostal Research Center honored Operation Compassion President David Lorency with the Spirit of Azusa Award and a reception on November 5, 2019. Church leaders, friends, community members, and family gathered in the North Cleveland Church of God Dixon Chapel to show appreciation for Lorency’s lifetime of ministry “unto the least of these.” In presenting the Award, DPRC Director David Roebuck praised Lorency for his exceptional ministry of networking that he so ably has used throughout his life to connect resources, transportation providers, and people in need.

First Assistant General Overseer and Executive Director of the Church of God Division of Care Ministries Dr. Raymond Culpepper praised the work of Operation Compassion under Lorency’s leadership. Culpepper noted that of the 1.2 million charities, the international charity relief agency is consistently in the top 200. He also announced that a book is being written on the lives and ministries of the Lorencys.

A native of Norfolk, Virginia, David Lorency’s parents and his childhood church, Glad Tidings Assembly of God, modeled serving those in need. Lorency later joined the ministry team at Virginia Beach’s Azalea Gardens Church of God and eventually was ordained as a bishop in the Church of God. He has served as youth minister, pastor, evangelist, church planter, and denominational leader.

Lorency started Youth Challenge Outreach (YCO) as an umbrella agency for numerous coffee houses, servicemen’s centers, and beach outreach stations. YCO grew to reaching thousands of youth, employing nine full-time and 70 part-time staff members. YCO moved beyond Virginia Beach and into Mexico where Lorency and his young family reached out to children and youth across the nation. Lorency later transitioned to pastoral ministry and served congregations in Detroit, Michigan; Bakersfield, California; and Alabaster, Alabama. At each location, his ministry focused on meeting community needs as an integral part of sharing the gospel.

The Church of God appointed Lorency to serve as metro evangelist in Northern New England. He continued to lead on the state and regional level as Evangelism Director of both Chicago Metro and California. More than 100 churches have been planted during his ministry. 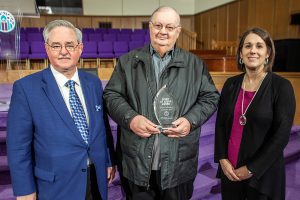 The DPRC launched the annual lecture on the centennial of the renowned revival at the Azusa Street Mission in Los Angeles. Church of God Historian Charles W. Conn noted that the Los Angeles revival, which lasted from 1906 to 1909, “is universally regarded as the beginning of the modern Pentecostal Movement.”

The Los Angeles revival began when African-American Pastor William J. Seymour preached a message of Spirit baptism following salvation and sanctification. What started as a home prayer meeting attracted throngs of seekers and was moved to an abandoned church building at 312 Azusa Street. Hundreds traveled to the Azusa Street Mission, received a personal baptism of the Holy Spirit, and took that message to their homes, churches, and communities. The Pentecostal Movement quickly became a great missionary movement, and the twentieth century came to be called the “Century of the Holy Spirit.”

Prior to the Spirit of Azusa Award presentation, Dr. Lisa P. Stephenson presented the Azusa Lecture entitled “Unto the Least of These: Biblical and Theological Foundations for Benevolence.” Stephenson is an ordained minister in the Church of God and Professor of Systematic Theology at Lee University. In addition to her teaching, Stephenson is director of the Graduate Studies Program in Bible and Theology, and director the university’s Benevolence Program, which provides the theological and biblical foundations for the service hours students must complete each semester they are at Lee.

In introducing Stephenson, Roebuck noted her impressive list of conference presentations, chapters in edited books, and articles in journals such as Pneuma, Journal of Pentecostal Theology, Scottish Journal of Theology, and Journal of Church and State. Stephenson has served on editorial boards for Baker Academic Press, T&T Clark, and the Society for Pentecostal Studies. Her book, Dismantling the Dualisms for American Pentecostal Women in Ministry, won the Society for Pentecostal Studies’ 2013 Pneuma Book Award, and that same year Lee University honored her with their Excellence in Scholarship Award.

The Dixon Pentecostal Research Center is home to one of the world’s significant collections of Pentecostal resources as well as the archives of the Church of God. In addition to students at Lee University and the Pentecostal Theological Seminary, numerous scholars use the center’s holdings related to the Pentecostal-Charismatic Movement.