November 6, 2019–Cleveland, TN–Dr. Paul Conn, president of Lee University, has announced his intention to leave his position in the summer of 2020.

Conn made the announcement to the university faculty yesterday. Conn told the faculty that he had met with the Board of Directors last Friday, during the school’s Homecoming weekend.

“Last Friday, I asked the Board to begin the search for my successor. My plan is to stay until our summer commencement, August 1, which would be my last day in office.” August 1, 2020 will be 34 years to the day that Conn was appointed president during the Church of God General Assembly in Atlanta on August 1, 1986.

Conn said he will stay on the leadership team of the new president. “Although I will resign the duties of the president, I have agreed to stay at Lee in a new role, as Chancellor, a position which will be established on August 1. In that position, I will continue to be active doing whatever I can to advise and support the new president.” 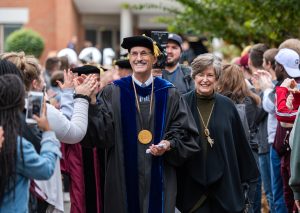 Conn, 73, has been president of Lee since 1986. His thirty-four years at the post make him the longest-serving CEO of a college or university in Tennessee. He is currently in the second year of a four-year appointment, according to Dennis Livingston, chairman of Lee’s Board of Directors. Livingston, a resident of Charlotte, North Carolina, stated: “The Board of Directors has agreed to Dr. Conn’s request that we begin a search for a new president. We do this reluctantly, but with respect for his decision to make this transition. Each of us individually joined this board, during the last twenty-five years, because we bought into Dr. Conn’s vision for what Lee University can and should become, and because we want to embrace and support his dreams for this school.

“Dr. Conn’s vision will not end here. We are pledged to find a successor who will continue the work he has set in motion. We hope to find a new president who will inspire the same confidence and enthusiasm which Dr. Conn has drawn from so many people.”

Conn stated: “I have made this decision because I believe I can serve Lee better not by directing the day-to-day operations, but by working with a new leader who can bring fresh energy and insight to our shared vision.”

Conn is a native Clevelander who earned a Ph.D. degree from Emory University in psychology, before returning to his alma mater as a psychology professor in 1971. He served on the Lee faculty for the next fifteen years before being appointed president, and spent five years in postdoctoral study at Harvard University. He still teaches a freshman psychology class each fall semester.

Under Conn’s leadership, Lee “has been transformed”, according to Livingston. Enrollment has mushroomed from 1,000 students to over 5,000. The physical campus has grown from 23 acres to 125 acres, with the completion of thirty building projects. Athletically, Lee has developed from three sports in the NAIA to the current eighteen sports at the NCAA Division II level. The university’s operating budget now exceeds $100 million, and Lee has become one of Cleveland’s largest employers.

Livingston stated: “We will have time in the next several months to reflect on the unprecedented accomplishments of Dr. Conn’s presidency, but for now we just want to announce his decision to make this transition, and begin seeking the person who can best extend Lee’s momentum into the future.”

Livingston said he will appoint a search committee within the next week, which “will seek input from alumni, community, church, faculty, and other stakeholders. We want to do a thorough review of all the possible candidates, but we hope if possible to identify and introduce a new president perhaps within three months. That would give Dr. Conn and his successor time to work together to prepare for a transition late next summer.”

In a sometimes emotional speech to the faculty and staff, Conn said: “This is the job I love, at the place I love, working with the people I love. But it is important for any leader to know when it is time for a change, and Darlia and I agree that the time has come. I believe great things lie ahead in Lee’s future, and I’m eager to be part of that future as Chancellor. I’m not going anywhere. Cleveland is my home, and Lee is my life. I plan to stay and do everything I can to help make the next president successful. My title will change, but not my heart.”

Conn has won numerous awards during his tenure, and has been elected to the governing boards of many national and regional higher education organizations.

Conn is married to Darlia McLuhan Conn, who came to Lee as an undergraduate music major from her home in Saskatchewan, Canada. They have three grown children, who along with their spouses are all graduates of Lee. The Conns also have ten grandchildren.