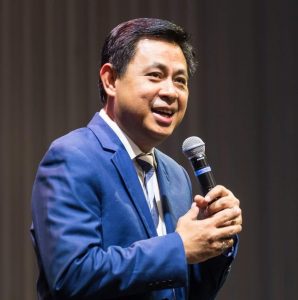 Current overseer Dr. Japarlin Marbun chose to endorse Abraham who on the first ballot was a close second to former overseer Dr. Jacob Nahuway. Like Marbun and Nahuway previously, Abraham now takes a seat as a voting member of the International Executive Council of the Church of God. A similar arrangement is in place for the moderator of the Full Gospel Church of God in South Africa, currently held by Stafford Petersen.

Rubin Adi Abraham and his wife, Lena, pastor congregations in both the cities of Bandung and Jakarta, Indonesia. In Bandung, “Pastor Rubin” is president of the Kharisma Bible College—a Level IV certified institution in the Church of God. The new overseer is the son of Pastor Julius I. Abraham, one of Indonesia’s oldest living pastors. Both Pastor Julius, and Rubin Abraham’s sister, Maria, are graduates of the Pentecostal Theological Seminary.

“Pastor Rubin is one of more than 3,000 graduates of Bethel Seminary Jakarta—the 1968 (Church of God) YWEA project—who now serve in full time ministry,” stated Tommy Smith, Regional Superintendent of the Southern Pacific and representative to Indonesia for the Church of God. “Thank God for the youth and children of the Church of God who are doing their part in Finishing the Great Commission!”

Joining Smith in representing the Church of God during the 16th Synod were Church of God General Overseer Tim Hill, David Blair, International Director of Youth and Discipleship, Michael L. Baker, Chancellor of Education and President of the Pentecostal Theological Seminary, and Andrew Binda, Field Director for Asia/Pacific. Former Church of God World Missions missionary to Indonesia, Mrs. Joyce Sands was a special guest at the historic Synod.

On behalf of the Pentecostal Theological Seminary, President Baker signed Memorandums of Understanding (MOUs) with eight Bible schools within the Gereja Bethel Indonesia. It was the largest number of MOUs signed at one time by PTS in its history. In addition, Blair presented youth and discipleship resources to be translated into Indonesian, a YWEA “love gift,” and a challenge to host an “Asia-Fest” in Indonesia, similar to Winterfest events.