MIP 2019 took place on May 17-18 in Cleveland, Tennessee. The ministerial training leaders were spellbound as they listened to Mario tell about his races and compared them to his Christian race. When he finished his presentation, Mendoza received a standing ovation.

Some of the principles that he shared included:

• The race of faith is like running an ultra-marathon.
• Studying the race course—knowing where you’re running—in both an ultra-marathon and the race of faith is important.
• Distractions occur in both, so we must zero in on the race.
• Pacing ourselves is important or we’ll faint.
• Anyone can start and end a race speedily but running between the beginning and the end requires perseverance and patience.
• Running a race hurts but focusing on the joy of completing the race gives strength.
• Training doesn’t show immediate results, but it will be noticeable in the race. 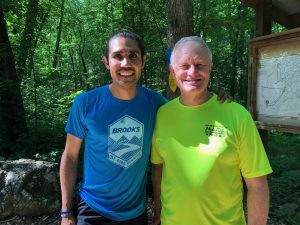 Mendoza has participated in two of the most important ultra-marathon races in the world—the IAU World Trail Championship at Penyagolosa, where he placed sixth, and the Western States Endurance Race. He has been named five times as the USATF Trail Running National Champion and received many more world and national recognitions.

Mario and his wife, Jade, have started a ministry called Beautiful Feet Ministries. The ministry endeavors to build bridges within communities through running. A video about the ministry can be viewed at http://bit.ly/2X2gMEd. He may also be reached through https://beautifulfeetproject.com/ and contribute to his Church of God World Missions project. His website is http://mendozarunner.com/.

Dr. Donald Bennett, USA coordinator in the Division of Education, remarked, “Mario captured the attention and hearts of the state ministerial training leaders through his insights about the Christian race and about the importance of training for the race. As Mario was teaching, you could sense that he connected with the leaders, they were grasping principles, and wanted to hear more from Mario. I encourage administrative bishops and pastors to contact Mario to speak in their state or church.”