Conn’s speech was a highlight of a weekend-long celebration at Lee that combined the annual Homecoming activities with a culmination of the year-long commemoration of the school’s founding, 100 years ago on January 1, 1918.

The address was delivered to a Conn Center filled to capacity on Friday morning, November 2.
During the speech, Conn took the opportunity to highlight the relationship with the Church of God that continues to anchor the school a century after its founding. 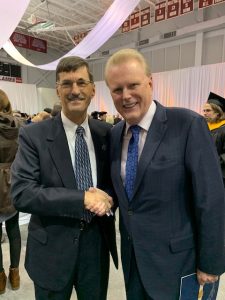 “Our most important relationship is with the Church of God,” Conn told the audience that included leaders from the Church of God and the City of Cleveland. “That relationship has at times been an uneasy one over this last half century. An evolving institution, which is part of a denomination, has to develop an appropriate role within that church, and a distance from it that is both authentic and comfortable. We think of ourselves as children within the Church of God household, but as children grow up, and develop their own identity and ways of looking at the world, they must learn how to be faithful members of the household, and still assert their own individuality.”

“That can be tricky business, and many colleges and their sponsoring churches have not managed it very well,” Conn continued. “But I can say emphatically that the Church of God, during this last 25 years, has encouraged us, supported us, and cheered for us, during this period of breath-taking transformation. The Church of God deserves a lot of credit.”

Church of God General Overseer Tim Hill was in attendance at the Celebration event and resounded Conn’s assessment of the Church and school relationship.

“The evolution of Lee University over the last 32 years under Paul Conn’s leadership has been nothing short of extraordinary,” Hill stated. “Along with success of this magnitude comes inevitable change. I have even heard some suggest that our flagship institution is no longer Church of God. However, the speech I heard today reiterated what I already knew: Lee University is a stalwart member of the Church of God’s higher education community, representing our church’s heritage in a powerful and exemplary fashion in the Christian community.”

“This church (Church of God) has understood our need to redefine our role within the denomination and the world,” Conn said, “to become a bigger tent, to be more open and more intellectually and socially aggressive, than Lee ever had been before…they have applauded us and stood by us through it all, and we love the church all the more for it!”

In addition to Conn’s speech, the Friday morning event included a 300-voice Celebration Choir, faculty, and alumni marching in regalia, and video presentations, which included the opening two minutes of a documentary on the century of Lee University’s history.

The snippet introduced Jessie Capshaw, one of the 12 students who enrolled at Bible Training School on that cold January day back in 1918. Throughout his address, Conn referred to 14-year-old Jessie and the tenacity she demonstrated in her quest to travel and become one of the Church of God school’s first students.

“The spirit of Jessie Capshaw still lives in Lee students,” Conn stated. “I have seen it thousands of times – students with the same courage, the same sacrifice, the same calling, that brought Jessie Capshaw to Cleveland a century ago. So although I didn’t know Jessie, I have known her sisters and her brothers down through the generations. They live in a world of vastly different circumstances, but in ways that really matter, the deep things of the heart, they are not so different from Jessie. It is in that spirit that I say this morning: I am Jessie Capshaw! At Lee in 2018, we are all Jessie Capshaw.”