On Monday, August 27, Dr. Tim Hill, General Overseer of the Church of God, was among more than 100 Evangelical leaders to attend a special appreciation dinner at the White House to recognize the impact that faith has on our nation. The dinner was hosted by President and Mrs. Trump, but included Vice President and Mrs. Pence, Secretary of Housing and Urban Development Ben Carson, and a host of other governmental leaders.

While several religious leaders were given the opportunity to pray during the dinner, earlier in the day a special prayer session was held where those in attendance spent an hour before the Lord in intercession for our nation.

During the dinner, President Donald J. Trump addressed the religious leaders, pointing out areas where his administration had addressed topics relevant to those in the audience. He and the First Lady also personally greeted those in attendance, thanking them for their service to the Lord and our nation.

During the dinner, Dr. Hill was seated at the table near First Lady Melania Trump, as well as with former Kansas Governor Sam Brownback, who now serves as United States Ambassador-at-Large for International Religious Freedom.

In response to attending the meeting at the White House, Dr. Hill had these comments:

On Monday Night, August 27, I was afforded the privileged opportunity to join with about 150 other ministry and denominational leaders for a special appreciation dinner at the White House hosted by President and Mrs. Trump. The invitation to attend came to me shortly after the General Assembly and it was an honor to be included.

Earlier in the day, a special prayer session was held at the Trump Hotel where those in attendance spent an hour before the Lord in intercession for our nation. There were several prayer moments at the dinner event along with numerous exhortations from a number of pastors and religious leaders.

The President and First Lady were most gracious to their guests giving much time to personally greeting each one and momentarily visiting with as many as possible before leaving the event after a little more than two hours. President Trump delivered a brief speech highlighting various issues and topics relevant to his audience, listing numerous initiatives and efforts to which he has given some of his attention. Vice President and Mrs. Pence attended the dinner as well as Secretary Ben Carson. America’s Religious Freedom Ambassador, Sam Brownback sat across from me and was most engaging in meaningful conversation. I was very impressed with the friendly demeanor and helpful assistance of everyone with whom I interacted from the moment I walked through security until I left the White House. 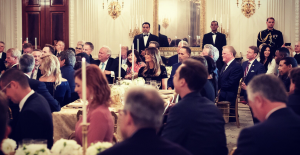 General Overseer Hill (in right of photo) is joined by Evangelical leaders at an appreciation dinner at the White House with President and Mrs. Trump (click photo to enlarge)

As General Overseer, I am fully aware of the acute political distance from one pole to the other that exists in our nation. As you know, the ever widening divide manifests itself frequently in various ways and that’s certainly not exclusive of the church. Knowing this, I’m always aware that as General Overseer, my words, actions and the invitations I accept, carry a heavy weight of accountability.

My choosing to attend this event was not without prayerful consideration. Yes, it was an unbelievable privilege and admittedly I was awestruck while walking through hallways lined with portraits of past Presidents and First Ladies. I even glanced up and said, “Hey Dad, who would’ve ever believed it?”

Once beyond my emotional and sentimental moments, I consciously and by choice walked into a grand room. By doing so, I made myself available to a conversation. I made myself accessible to a responsibility. I made myself more vulnerable to scrutiny -from those who know me and now those who don’t.

Political persuasions and personal opinions about The President aside, our nation needs God’s help and intervention. If my minuscule presence and influence last evening is of any consequence, then let it be in the direction of national repentance, revival and helping a very determined, yet mortal man understand that “Righteousness exalts a nation but sin is a reproach to any people.” – Proverbs 13:34

Dr. Hill went on to note that he was highly honored, and even somewhat awestruck, to be invited to the White House. His experience, however, included some levity…

“Upon checking in and presenting my ID at the guard station, the officer assured me of my name being on the list. However, by their records, my birth date was listed wrong, indicating that I was born later than what my drivers license showed. I was detained for a little more than ten minutes while they again verified my identity and invitation. So on a night as momentous as it already was, for a few brief moments, I was younger than I even thought. The White House said so,” Hill concluded.