Orlando, Fla.–Following General Overseer Hill’s opening address, the first order of official business for the International General Council was to elect the members of the Council of Eighteen, which will serve for the next two years.

Of the 18 men currently on the Council, five were ineligible to be reelected due to term limitations. After the nominating ballot and four subsequent ballots, the International General Council elected the eighteen who will be their representatives at the international level. 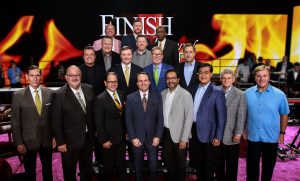 Elected first to the 2018–2020 Council was immediate past General Overseer Mark Williams. Since his term ended two years ago, Williams has been serving as senior pastor of the historic North Cleveland (Tennessee) Church of God. Following Williams was Gary Lewis, state overseer for South Georgia, who was first elected two years ago. Pastor of the Charlotte Central Church of God Loran Livingston was returned to the Council for a second, two-year term. Others who were elected in 2016 and returned to the Council were Kevin McGlamery, pastor of Life Church in Huntsville, Alabama; Ishmael Charles, field director for the Caribbean for the Church of God; Sean O’Neal, state overseer of Arizona; Travis Johnson, pastor of Pathway Church in Mobile, Ala.; pastor of the Potter’s House in Columbus, Ohio, Timothy Oldfield; Gerald McGinnis, senior pastor of Park West Church in Knoxville, Tenn.; Eliezar Bonilla, pastor of Vida Abundante Church in San Antonio, Texas; Barry Clardy, senior pastor of Princeton Pike Church of God in Hamilton, Ohio; and Keith Ivester, state overseer of Florida-Tampa.

Joining the Council elected in the ninth position is T. Bryan Cutshall, president of Church Trainer Ministries. Cutshall returns to the Council after serving terms in the past. Also returning to the Council after a hiatus was Thomas Madden, who currently serves as state overseer for the Church of God in North Georgia. A third returning member of the Council is Pastor Niko Njotorahardjo, of Gereja Bethel Church in Indonesia. Pastor Niko, along with Ishmael Charles, satisfied the required representation of two members residing outside the United States.

The 2018–2020 edition of the International Executive Council will first meet the third week of September.