Church of God General Overseer Tim Hill has written a new book which addresses how God “exceeds, increases, and accelerates your life.”

The book is not scheduled for full release until January 2019, but a limited number of books have been secured and will be available at the International General Assembly of the Church of God, which takes place next week in Orlando, Florida.

The book is being published and distributed by Charisma House Publishing in Orlando. However, through a special partnership, this first release of 2,000 copies will be dual branded with Pathway Press and sold at the Pathway bookstore in the exhibit hall at the Orange County Convention Center.

On Wednesday, August 1 from 12:00 – 1:00 p.m., a special “Meet the General Overseer” will take place in the exhibit hall. Copies of the book will be available for Hill to autograph at that time. Once the limited release is depleted, the title will not be available again until January 2019. To inquire of the availability following the General Assembly, visit pathwaybookstore.com. 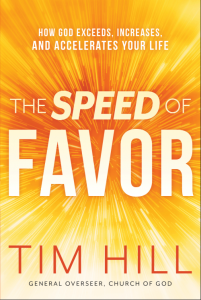 [1]A fact sheet released by Charisma states that Speed of Favor “will keep people from living in fear of what’s to come for the end times and, instead, embrace God’s blessings on family, finances, and faith.” Speed of Favor unpacks the three powerful promises God makes in Amos 9:13 and empowers readers to claim them for their own lives, including 1) The Lord will exceed all you expect, 2) The Lord will increase all you invest and 3) the Lord will accelerate time to accomplish His kingdom purpose in your life.

The fact sheet further states that, “Rather than Christians living in fear of what’s to come, Tim Hill invites them to move to a new level of trust and confidence in God and a higher level of faith and expectation as they discover the accelerated season of favor God has promised for the days ahead. Flying in the face of the doomsayers who forecast the demise of the church, Hill recovers an ancient prophetic promise of provision. Sharing how this revelation affected his own family, finances, and faith, Hill challenges readers to break free from a powerless, status‐quo Christian life filled with anxiety, depression, and hopelessness as they discover how God’s blessings and provision precede them and enable them to make a difference in others’ lives.”

The Message states Amos 9:13 as “Yes indeed, it won’t be long now. God’s Decree: Things are going to happen so fast your head will swim, one thing fast on the heels of the other. You won’t be able to keep up. Everything will be happening at once—and everywhere you look, blessings! Blessings like wine pouring off the mountains and hills.”

“The Amos 9:13 promise is not about prosperity,” the statement concludes. “Neither is it a word for just one season. It is a way of life. Hill encourages readers to welcome it, embrace it, and claim it as their own.”